How to interpret an echogram?

In several biologging studies that have used acoustic recording tags, I see graphs called "echograms" but I'm having trouble understanding them.

For example, here is one made from a sound-and-movement tag deployed on a harbour porpoise on the left, and a Blainville's beaked whale on the right (from Vance et al., 2021).

However, I'm confused why the resolution in the image changes (especially in plot B, with the beaked whale, it looks chunkier on the left side). Also, why there are always stacked squiggly lines on the right hand side of these plots occuring after the start of the buzz (they look like harmonics?)? Why is there a horizontal line of warm colours, indicating a high SNR (signal to noise ratio), throughout the bottom of most of the porpoise plot? Why does this not occur across the whole x-axis of the beaked whale plot? Why is the y-axis of different ranges for the two species?

Anyways, if someone please explain how to interpret an echogram it would be appreciated. Thanks!

This is due to the varied inter-click intervals of the two species. The animal only receives information back for each click it has produced, and when there is longer time between clicks, that piece of information received (a vertical slice through the echogram) is temporally extended along the x-axis (to make it easier for us to interpret) until the next click is produced (and subsequent echo is received). Beaked whales generally click at higher ICIs (few hundred ms) and then change to a buzz (low ICIs) - this is reflected with the chunkiness of the echogram resolution, before the start of the buzz (time 0) in Fig B, which then abruptly changes at the start of the buzz. This 'change in chunkiness' is more subtle in the porpoise example (Fig A) since their ICIs more gradually decrease as they approach a prey target.

There seems to be dispute in the previous answers as to whether or not this chunk-extension display choice is misleading, and I would argue that it's not misleading to temporally extend the latest piece of echoic information that an animal has received. It is this (and the previous) pieces of information that it holds and that guide its next echolocation behaviours. This x-axis extension for each slices/snapshots of echoic information until the next click is made helps us visually interpret any target echoes present. I would argue that it would be misleading if ICI information was thrown out, and the amount of x-axis space that each click/echo made up was the same width, but that is not done here.

These are not harmonics, but indeed the 'next' set of rapidly produced buzz clicks. The creator of the plots has to decide what the y-axis is, or, in other words, how far ahead of the tag we want to 'see'. An appropriate y-axis upper limit will depend on the ICI of the whale (with longer ICIs corresponding to inspecting farther ahead, and a generally higher y-axis range). For both examples in Fig A and Fig B, we see a faint line from the top left hand side of the plot, diagonally descending. These are echoes off of a prey/target that the whale is approaching. From a sensory ecology perspective, it makes sense to display the echolocation behaviour throughout the whole prey-approach sequence. However, this has some consequence, as you point out with the stacked squiggly lines on both plots.

This is the outgoing signal (the click), as recorded by the tag, generally behind the blowhole of the whale. Other traces seen in the plot are echoes off of objects in the environment ahead of the whale. Slight wiggliness in this outgoing-click line can be explained by the head of the porpoise moving while clicking (Fig A). Beaked whale clicks have a more abrupt change in SL (source level) between their FM (frequency modulated) clicks and their buzz clicks, and this is shown in the less-bold line at a y-value of 0 distance during the buzz.

Echograms are produced by aligning the envelopes of short sections of audio. For odontocetes, these sections of audio are selected based on the detected clicks from a tagged whale or one recorded by a towed hydrophone. Echoes from targets form sequences of arrivals which appear in the echogram (Johnson et al., 2004; Johnson et al., 2006; Johnson et al, 2009; Madsen et al, 2013). For data collected by an animal-borne tag, echograms can be used to analyze how the animal was using echolocation to navigate and search for or capture prey.

In the example you provided, my understanding is that the energy along the x axis is that from the outgoing clicks produced by the tagged animal. The energy and interval between clicks can vary- which may change what is seen in the echogram. My interpretation is that in Figure A the faint white line is the prey, getting closer to the porpoise before the buzz, and then attempting to escape just after the buzz. In both, the stacked wavy lines are the energy of the subsequent clicks.

I cannot explain the variations in resolution, but below I've provided some examples and references which I used to try to understand echograms. 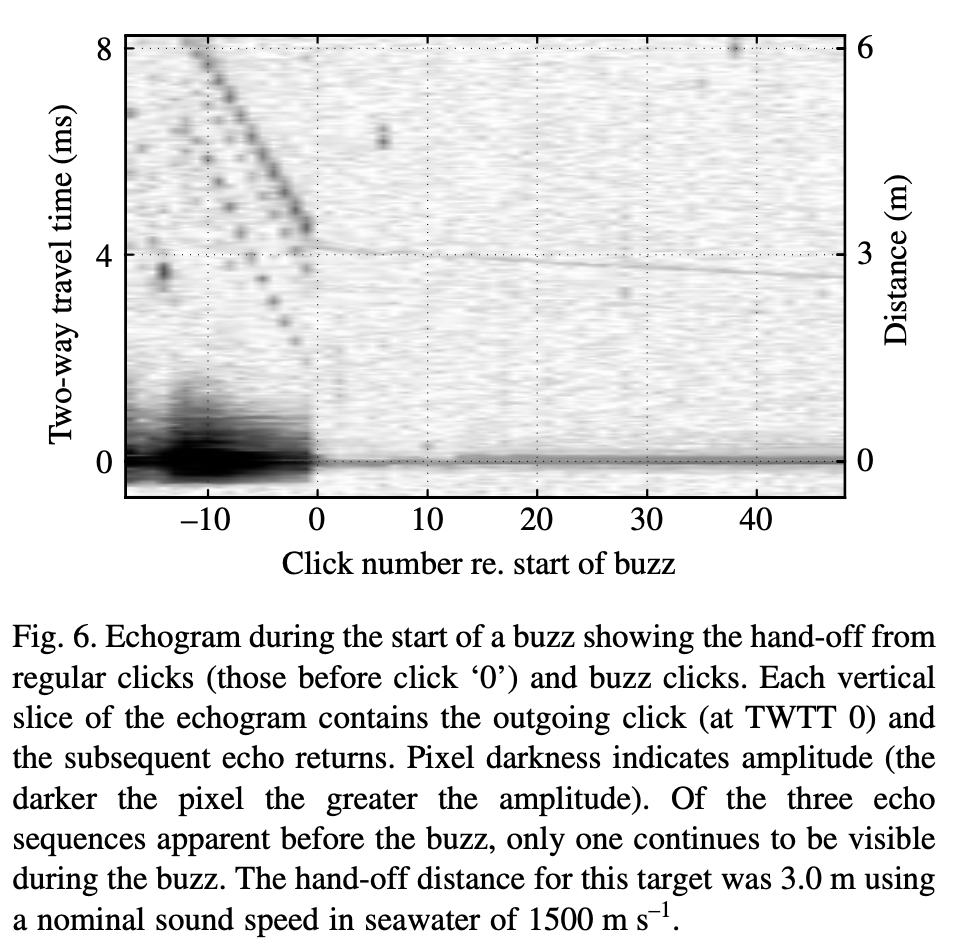 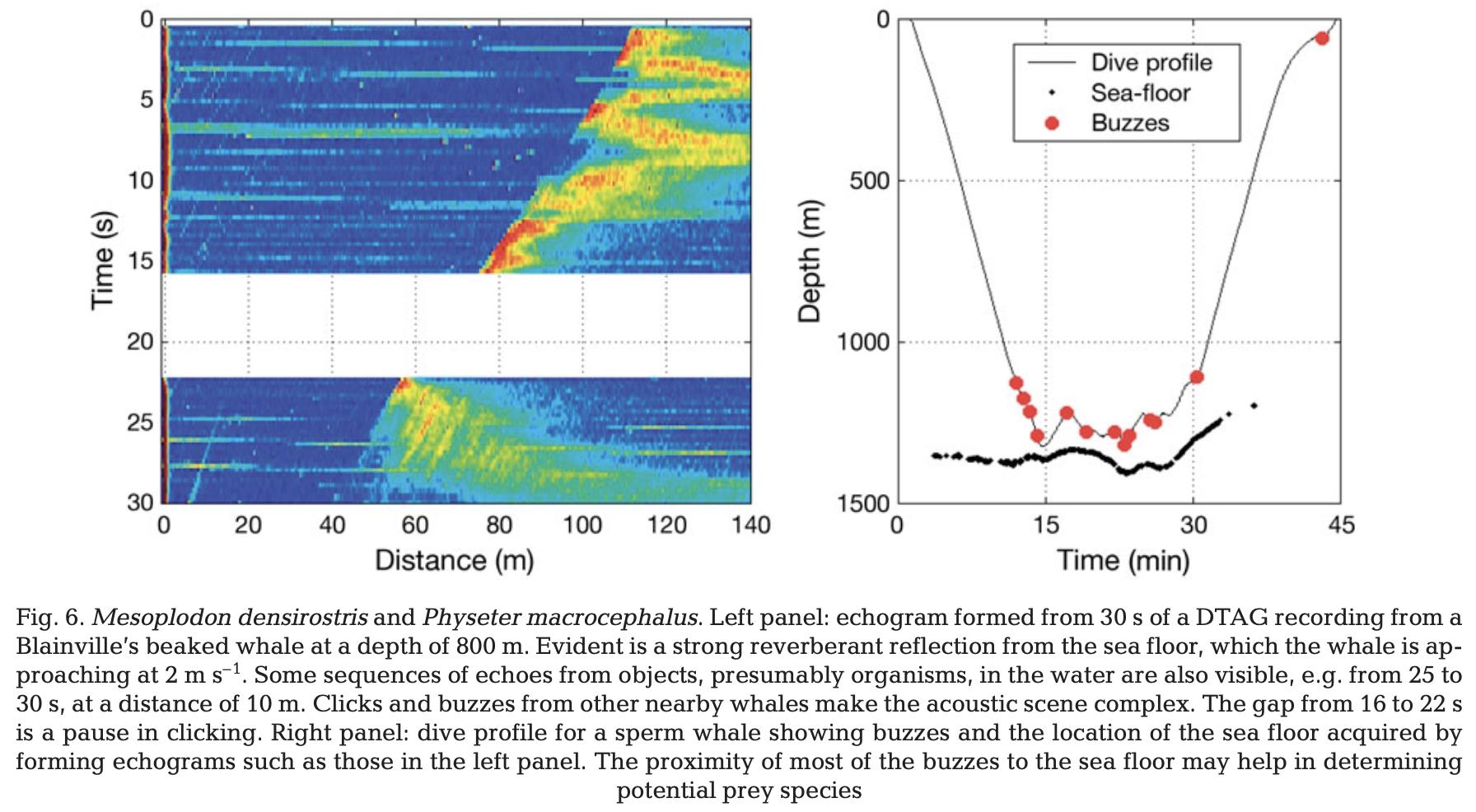 Figure 3: A) The envelope of the FM and buzz clicks during the approach and capture phase as a function of time from the end of the buzz. Note the dramatic change in acoustic gaze via a large reduction in amplitude (two orders of magnitude) and increase in sampling rate (two orders of magnitude) to reduce the auditory scene to a single target in the buzz. B) Echogram of the approach to and capture of a prey. All clicks are time aligned at range 0, and energy is then color coded as a function of the two way travel time (TWTT) and hence range from each click. Note how several targets can be seen in the approach phase with slow but power full FM clicks, and how the transition to a buzz leaves only a single target left for fine scale tracking. The spurious v-shaped structures at range 3m and 5.5 m in the buzz are generated by the next clicks. C) Inter click intervals (ICIs) of FM and buzz clicks showing the lack of TWTT adjustment in the approach phase, but close tracking in the buzz phase. The blue line is the TWTT derived from the echo delays in (B).

I have used echograms to study sperm whale dive behaviour, and specifically look for echoes off of the sea surface and seafloor. Below are some examples from my work. 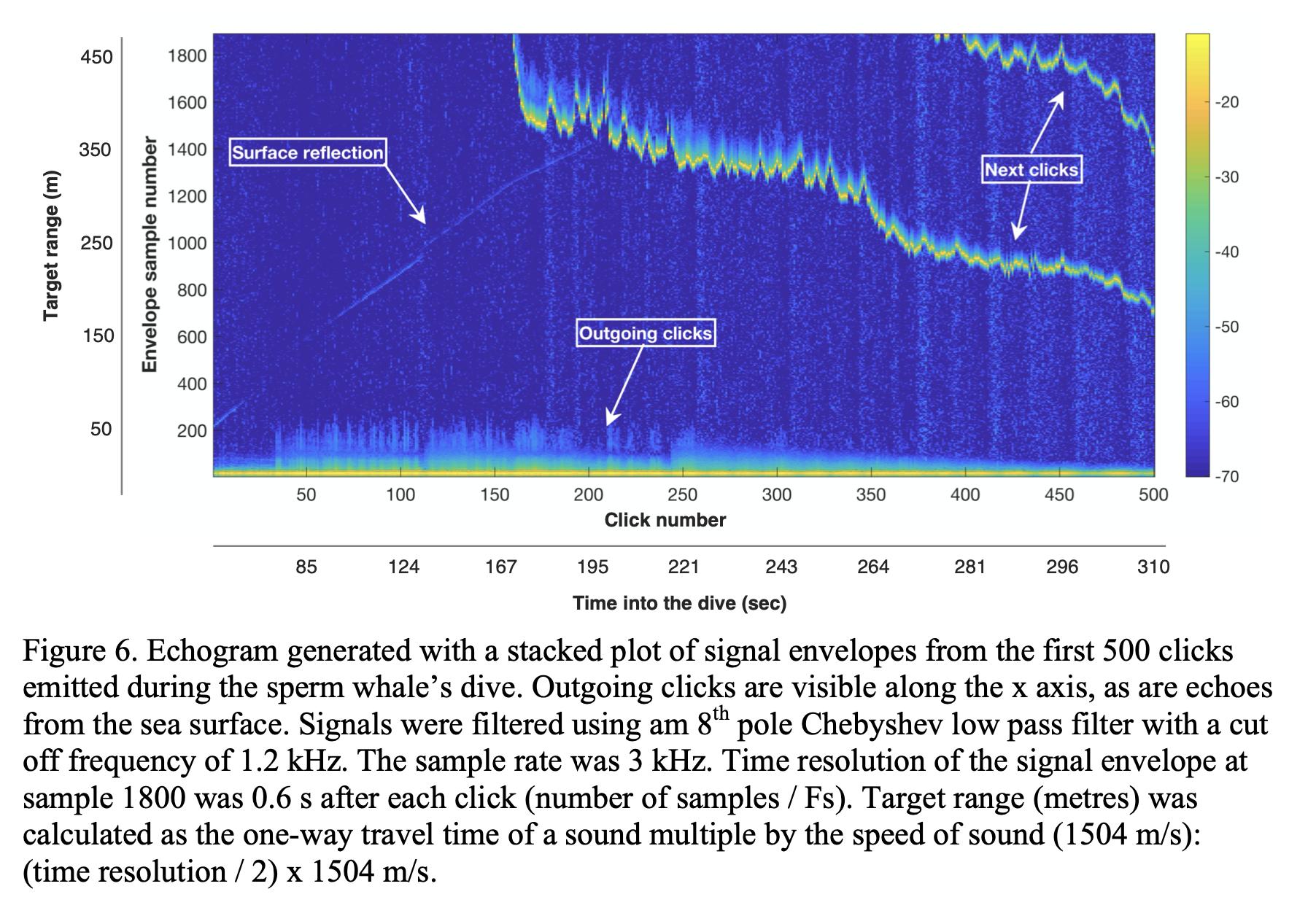 Here is an echogram produced from clicks detected by a towed hydrophone array. Each vertical bin includes one of the detected clicks. By including 20 ms pre-click and 80 ms post click in each vertical bin, the plot reveals the multiple pulses of the sperm whale click and reflections from the sea surface. 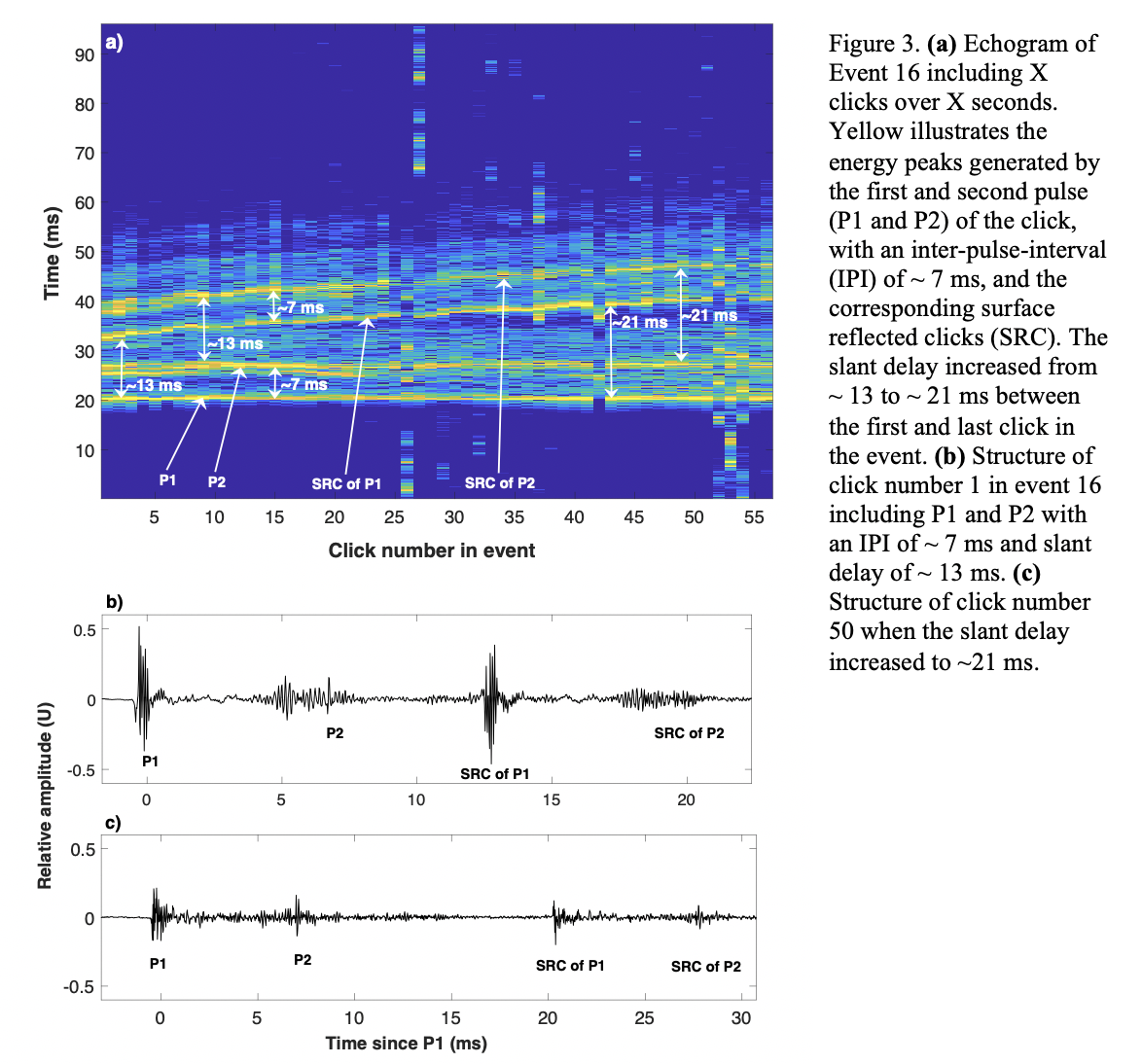 The different resolution in an echogram when you have time on the x-axis is because the x-axis must be scaled with the ICI meaning that the resolution is low for long ICIs and high for short ICIs as is the case for the echolocator as well:)

The Echogram in question is a very likely the attempt to resolve a visualization dilemma.

Imagine you have a series of echolocation clicks first some slower regular clicks (for a beaked whale, say ICI ~0.5 s) followed by a foraging buzz. You have two options to generate an echogram:

Ito overcome this, it seems that the authors have used a plotting routine that fills the void time slots with the previous data or with data from the next neighbouring click. This could explain the junks of identical data (before 0 in B and between 1.5 and 2 in A)

The weak data in front of the Pp clicks (A), is an indication that there is sound leaving the animal, before the echolocation click is emitted. IMHO, that is something bio-acousticians would/could/should be interested to explain.

The 'wiggling' clicks on the right hand side of the plots are the next click in the data-after-click series, and why did the authors choose different y-axis, that can only be explained by them.

Following @Ckloe answer, I like to adapt my answer and note that both ways of presenting echograms (time/range and click number on x-axis) are used and in @AWestell's answer.

6
How to remove DC offset from my audio recordings in spectral domain?
9
How do I detect 50kHz echsounder in PAMGuard
11
How to measure sperm whale's IPI?
10
How to assess the quality of audio signals?
6
How to change date/time created on Zoom H4N metadata
18
$10\log_{10}(X)$ or $20\log_{10}(X)$ dB values - how to tell?
10
How do I synthesise an arbitrary frequency-modulated sound?
6
Fun challenge: how would you analyze this sound track to show presence or absence of acoustic interactions
9
How to measure long-term dataset for soundscape AND impulsivity?