What could cause only half of a waveform to clip?

I took some recordings with small microphone tags and observed this type of 'clipping' where only half of the waveform appears to be clipped, while the other remains intact. 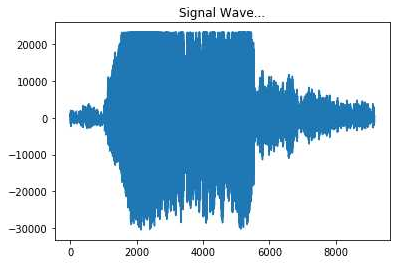 Does anybody have any idea of what could possibly cause this? Unfortunately I am unable to obtain manufacturer specifications at the moment. The spectrograms look perfect and the audio quality in playbacks appears to be fine as well.

It could be caused by DC (direct current) offset. This happens when the signal "idle" value is shifted from the normal zero value during the recording.

The picture below is an example of DC offset. You can see that most of the signal is above the zero value. When the signal is digitized to 16-bit signed integer samples all values above the maximum 32767 (the red part) are clipped.

Later when the DC offset is corrected the signal could look like yours:

During usual audio recording a high pass filter is applied to block very low frequencies including the DC offset. This filter could be missing or faulty in your circuits.

As a temporary workaround you can lower the gain during your recording. This will of course make the SNR and dynamic range lower.

As Dan Stowell pointed out a physical obstruction of the microphone's membrane could be another reason for similar clipping.

Detailed examination of the signal (zoom around the clipping values) should allow you to distinguish the two. Value clipping (caused by DC offset) should show the maxima always at the (almost) same value. A physical obstruction in the microphone should probably allow some variance among the maximum values.

It could be a physical defect or obstruction in the capsule, that prevents the transducer element from moving all the way to its full extent.

It's surprising that you say the audio quality appears to be fine - the imperfection should certainly be audible. With one-sided clipping like that, there should be audible artefacts with odd-numbered harmonics, and these would typically sound quite different to the animal sound. Are the artefacts also visible on a spectrogram? Perhaps the artefacts are mainly occurring in the higher frequency bands, making them less perceptible to you.

There may be a light breeze blowing by the mic? This may appear as a low frequency oscillation that only 'adds' to the positive part of the waveform and thus clipping it.

You may be able to simulate this kind of clipping by adding a low frequency sinusoid (< 10 Hz) to an audio snippet that is smaller than one cycle of the low frequency sound.

11
What state and federal permits are required for stationary PAM?