What is the best way to distinguish between those? Is the distinction based solely on ICI (inter-click-interval) and if so, what is the ICI range for a click train versus a burst pulse for example? (<10 ms appears to be the number?)

There is some emphasis on ICI in how burst pulses are defined in the literature. For example, in Lammers et al. (2003) burst pulses described as follows: "Burst pulses were distinguished from echolocation click trains on the basis of their ICIs. Click trains were considered burst pulses if their mean ICI did not exceed 10 ms." (p. 1631).

Lammers et al. (2003) also discussed some overlap between burst pulses and terminal buzzes: "Admittedly, this distinction [a burst pulse pattern with interclick intervals consistently less than 10 ms] is not necessarily definitive because click trains are sometimes produced that begin with long interclick intervals ~10–1001 ms and end with very short ones ~1.5–9 ms." (p. 1636).

There's a lot of confusing terminology used about click-based signals in cetaceans, especially if you go back into even slightly older papers. Walter's terminology is great but maybe think of it in terms of functionality instead:

Signals for echolocation: All toothed whales echolocate by emitting clicks and listening for returning echoes from prey or other objects in their surroundings. Echolocation is an extremely dynamic sensory system and many sonar parameters, including especially interclick intervals (ICI), depend intricately on species (scaling), context (acoustic environment) and prey proximity and behavior. While all species tend to switch from regular search click series (slow rate/long interclick interval) to foraging or feeding buzzes (high rate/short interclick interval) when catching prey, the ICI cutoff depends on species (figure 1) and there can be a bit of fluidity for species catching highly mobile prey or in complex (esp shallow water) environments. 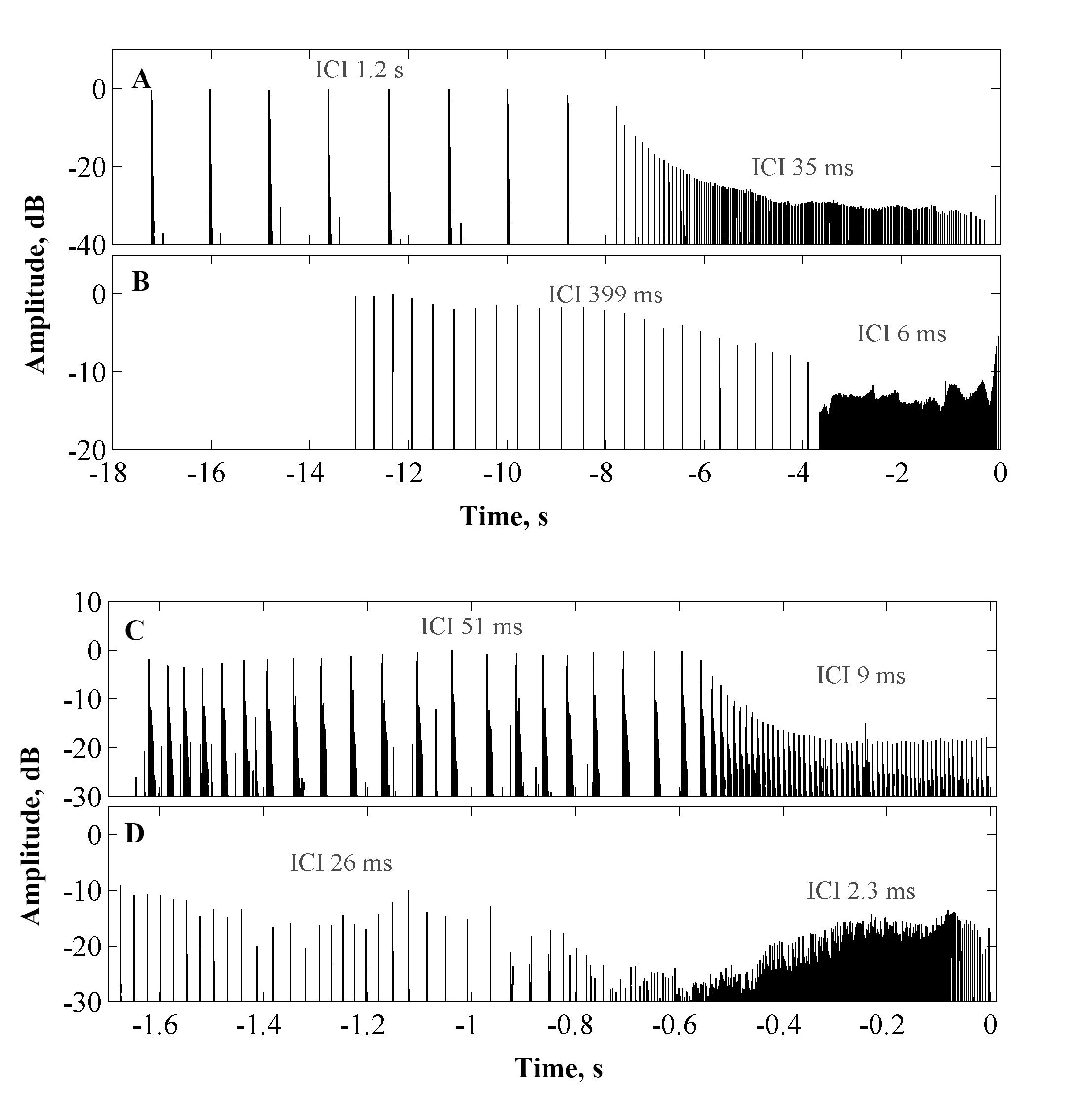 Signals for communication: Many echolocating cetaceans also communicate with click series with more or less stereotyped interclick intervals or even individual pulsed sounds. You will find many names used for these (i.e. codas and slow clicks for sperm whales, burst pulses for many delphinids and phocoenids, rasps for beaked whales and pilot whales, probably more terms too). Some of these can overlap with interclick intervals from search clicks and especially foraging buzzes.

To differentiate between regular search clicks and foraging buzzes, you can extract ICIs from acoustic tags and they will tend to be bimodally distributed. To differentiate between burst pulses and foraging buzzes, most studies (including Martin et al 2018 and Soerensen et al 2018) therefore make some operational definitions, including especially whether or not a group of rapid clicks come immediately after echolocation clicks or not.

Re ICI: the actual ICI depends very much on context and species with large overlap. So, no, ICI alone is not sufficient to characterize the type of click series, it needs species context information.

One of the reasons there is confusion in the terminology of the different click trains produced by odontocetes is because there is still considerable ambiguity with respect to the function of certain types of click trains, particularly those with very short ICIs. When performing a detection/classification task, dolphins typically produce clicks with an ICI equivalent to the two-way travel time to the target plus an echo processing period. During prey capture, however, that relationship breaks down in the terminal buzz phase when ICIs no longer appear to conform to this timing. It's generally presumed that echoes are processed differently in the terminal buzz phase to prioritize prey tracking over target classification/discrimination, but this has not yet be confirmed experimentally (as far as I know). So-called 'burst pulses' have very short ICIs on the order of a few milliseconds from start to finish. Under experimental conditions, they are not produced when solving echolocation tasks, but rather seem to be produced in various social contexts. It is presently unknown whether dolphins process the returning echoes from burst pulses in any way, which is why these signals are placed in their own signal class; not because they are fundamentally different from echolocation clicks, but because we don't really know what the dolphin does with them functionally (presumably something social).

In spinner dolphins, Lammers et al (2003) found that there was a bimodal distribution of ICIs that could be roughly separated into the > or < 10 ms. Thus, the dichotomy made in that paper. However, this could be different in other species. In addition, it's a dichotomy that primarily reflects what we understand and what we don't. Click trains with long ICIs are relatively well understood from a functional perspective. Those with short ICIs are still poorly understood and therefore labeled differently (terminal buzzes, burst pulses) with the assumption that they are functionally different somehow. However, as we all know, assumptions should be made with caution...

Although these terms are applied to various species, standard methods for distinguishing these acoustic signals differ depending on the species.

For sperm whales, ICI is often used to distinguish trains of regular/ usual echolocation clicks (ICI 0.2 - 2 s) from buzz clicks (ICI <0.2s) but these values vary depending on factors such as animal size and region. Some analyses may also use changes in amplitude to define the start of a buzz. In Weir et al. (2007) sperm whale squeals were recorded and found to be a series of very rapid pulses with repetition rates of up to 1622 clicks/s.

Here are a few references that discuss the characteristics of these sounds:

The DOSITS sound library has some good examples which may help you get a sense of how different echolocation click trains are depending on the ICI: